Is austerity linked to 120,000 unnecessary deaths?

“There was a report this week, we are getting 120,000 unnecessary deaths every year in this country as a direct result of the austerity.”

A report by academics at University College London published this week found a link between restrictions on health and social care spending and an estimated 45,000 more deaths between 2010 and 2014 than there would have been had previous trends continued.

While lower growth in health and social care spending since 2010 may be behind the increase in deaths, these findings should be treated with caution as the research doesn’t prove this is the case. Reduced spending is one of a number of possible explanations for the results.

Taking the 45,000 figure and adding it to the number of additional deaths they predicted between 2015 and 2017, they estimated that there were an “additional” 120,000 deaths between 2010 and 2017. Again, that’s compared to what would have been the case had previous trends continued.

Accounting for these things, the authors concluded that restrictions on spending and the number of nurses were linked with the 120,000 additional deaths.

Older people accounted for more of these additional deaths, with deaths at care homes and at home contributing most to the estimated additional deaths. Deaths in hospital were lower than expected. The authors put this down to greater pressures on social care spending, but also a drive to move more patients reaching the end of possible health treatments out of hospital.

While other academics have said the conclusions are “plausible” they have also stressed other possible explanations.

For example, Dr Richard Fordham, Senior Lecturer in Health Economics, University of East Anglia, has said: “...This is indeed a plausible hypothesis. But other explanations are available. Patient cohorts may have changed (for example more end-stage, longer-term illnesses); patients may have succumbed to  different or new diseases (eg. MRSA, cirrhosis etc.); or had greater multiple morbidities (asthma plus diabetes plus cancer etc. ) than similar cohorts of the same age before them?”

Professor Martin Roland Emeritus Professor of Health Services Research, University of Cambridge said: “This study suggests that a change happened to cause deaths to stop declining around 2014. This is likely to be a correct finding. However, the link to health and social care spending is speculative as observational studies of this type can never prove cause and effect."

You can read their full comments here, published by the Science Media Centre, a press office for scientific commentary on the news.

437,000 three day emergency food supplies went to children in the year to March 2017, according to figures from the Trussell Trust—the UK’s largest network of food banks.

This measures the number of food parcels given out rather than the number of children receiving them. The Trussell Trust says on average, people who were referred to them used a food bank twice last year—which they told us included children’s use too. So this suggests that around 220,000 children may have used Trussell Trust food banks over this period.

The Trussell Trust’s latest figures cover the six months from April to September 2017. During this time 209,000 three day supplies were given to children.

We’ve looked into the reasons behind rising food bank use here.

Are nurses taking a second job to survive?

“A quarter of our nurses need a second job. Many of them have to go to food banks.”

23% of respondents to a survey sent out to Royal College of Nursing (RCN) members said they had taken an additional job in the last year, such as agency nursing, to help pay everyday bills and living expenses. We don’t know how representative this is of all nurses, and this is based on a low response rate (8%).

Media reports show that at least some individual nurses and trainees have visited food banks and we’ve look at that in more detail here. We don’t have solid evidence of the scale of use.

A Royal College of Nursing employment survey released to the press this week found that 23% of respondents said they had “taken out an additional paid job” in the last year to meet daily bills and everyday living expenses.

The survey hasn’t been published, which is required for professional pollsters who are members of the British Polling Council. The RCN sent us a copy of the press release and initial findings. The questions can be found here.

According to the organisation that carried out the survey, the Institute for Employment Studies, these respondents had fairly similar demographics, educational levels and jobs to those of the RCN membership as a whole and so it can be said to be representative of the RCN’s membership—but we don’t have the full data to verify this.

If this is the case, then it increases the likelihood that the survey is representative of the RCN’s membership, but it’s still only a rough guide. The 8% who filled out the survey may still be different in ways that weren’t measured to the 92% who didn’t respond.

The Royal College of Nursing asked, “To meet your daily bills and EVERYDAY living expenses (rather than costs), have you done any of the following over the last year?”. 23% said they had “taken out an additional paid job”. The most common answer, selected by 50% of respondents, was “worked extra hours in your main job”.

Of those who said they took on an additional job, around half worked as a bank nurse, and 30% said they worked as agency nurses. Bank nurses are nurses that work covering other shifts when people are absent through sickness or on leave, or if a job is vacant.

Nurses and health visitors working in hospitals and community health services in NHS England earned an average of £31,000 in the 12 months to June 2017. That figure is the same whether you look at their basic pay for a full-time equivalent post or the total average earnings per person.

It’s just slightly higher than the average for all NHS England staff working in hospitals and the community using the FTE measure and slightly lower using the total average earnings.

Averages aren’t always that helpful when looking at something like pay though as the experience can vary quite a lot from person to person.

Once qualified nurses start working in the NHS they begin at pay band 5. This means that the entry level salary for a nurse or midwife in NHS England was £22,128 in 2017/18.

Nurses at pay band 5 have seen their pay reduced by between 7% and 11% between 2010 and 2016. That’s once you account for inflation, according to the King’s Fund health think tank. 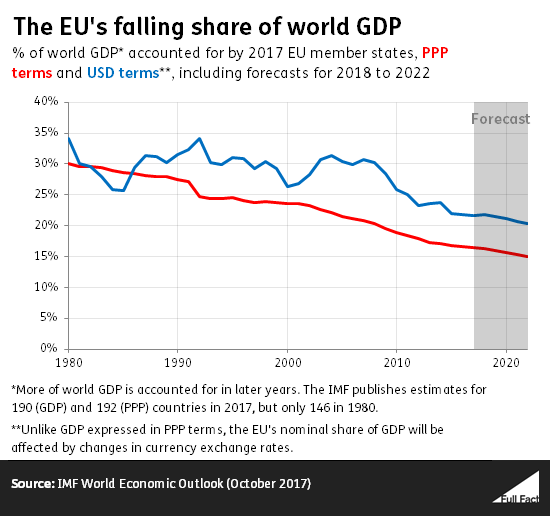 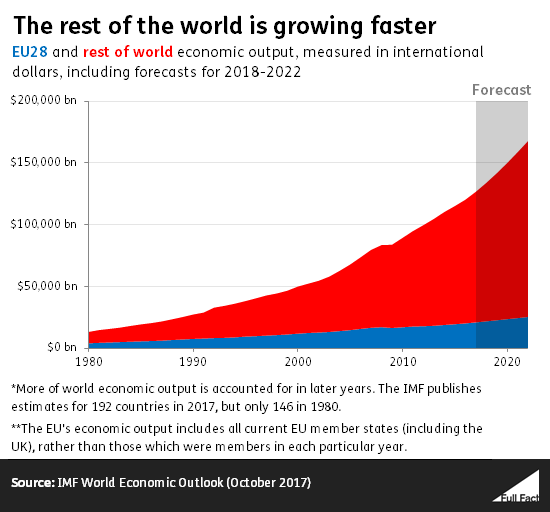 Is unemployment the lowest it has been since 1975?

“The employment figures were excellent this week. The lowest unemployment since 1975.”

There were 1.42 million adults unemployed in the UK in the summer of 2017. That’s 4.3% of people aged 16 or over classed as economically active—those either in work or looking for work.

It’s correct that the last time the unemployment rate was this low was in 1975. 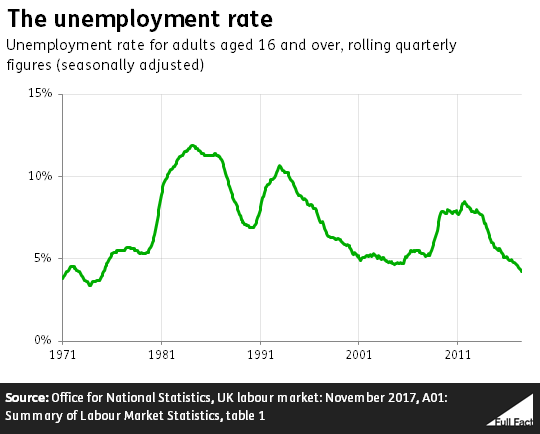 11.9% of 16 to 24 year olds (either in work or looking for it) were unemployed during the same period. That figure includes full-time students looking for part-time work. It’s also the lowest it has been since 2004.

These figures don’t tell us anything about “underemployment”. That’s the number of people seeking more hours, working no more than the maximum weekly working hours already, and able to work more within the next two weeks. We’ve written about this before here.