Is the UK economy in the relegation zone?

The UK has gone from being one of the top economic performers in terms of growth in the G7, Europe and the world to being bottom of the league in the last year.

It’s correct the UK had the fastest growing economy in the G7 in 2014 and was faster growing than the EU average in 2015. Various experts have said it is near the bottom of the G7 countries in 2017 and its growth is now lower the the EU average.

It’s correct that if you look at the UK’s GDP growth for the last few quarters it’s among the lowest in the G7 and lower than the EU average. It’s also much lower than other countries like China and India, but the comparison isn’t very helpful.

Before then, the UK was one of the top growing economies in the G7 and was above the average for the EU.

GDP is the total value of goods and services produced in a country.

There are other ways of comparing countries’ economic performance, but we’re focusing here on growth as Lord Rose referred to.

GDP growth: where are we now?

The Institute for Fiscal Studies said this week that once you compare various forecasts for GDP growth between 2016 and 2022 “the UK comes out well behind all of them [other G7 countries] with only Canada even within touching distance. And we don’t have to rely just on forecasts. The UK is currently growing more slowly than other advanced economies.”

The latest figures from the Office for National Statistics put the UK at the lower end of the G7 countries so far in 2017 in terms of GDP growth. It was at the bottom of the table in the first half of the year The Bank of England have also said the UK’s GDP growth in 2017 so far was lower than the average of the rest of the G7 countries.

The UK’s GDP growth was also below the average for the EU and the Eurozone from January to September 2017, according to the ONS. Looking at the individual countries in the EU, the UK also found itself near the bottom in terms of growth in each of the three quarters in 2017 so far and in the lower half of the league table in 2016.

It’s also well behind that of countries like China and India. Their growth consistently outstrips those of 'advanced' economies, but it's not always as helpful to compare these countries to the UK. As countries that have had less developed economies in the recent past they are now growing a lot faster than countries like the UK and Germany. 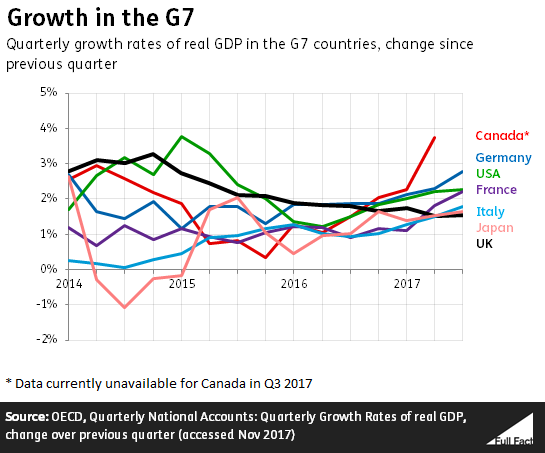 The UK had the fastest growing GDP in the G7 in 2014, and was joint first in 2016. The UK’s GDP growth hasn’t been above the average for the EU since early 2016 if you compare GDP growth from one quarter to the next.