Rounding off the election campaign

Today we’ve published our final roundups of the election campaign.

You can now see all our key fact checks from the Conservatives, Labour, the Liberal Democrats and SNP, and Plaid Cymru, the Green Party and the Brexit Party.

Also after nearly 500 of you sent us your questions, we’ve answered some of them as part of Ask Full Fact.

And if you’re planning to vote tomorrow, here’s our guide to what you need to know about polling day.

A photo of a boy lying on the floor of Leeds General Infirmary has become one of the most contentious stories of the election campaign.

Here’s what we know about the photo. We will continue to update this when we learn more.

The story first appeared in the Yorkshire Evening Post. The reporter who broke the story, Daniel Sheridan, has said on Twitter that he waited for the hospital to confirm the incident.

Sarah Williment told the publication that her son, Jack, had been taken to hospital on December 3rd with suspected pneumonia. Jack was moved from a bed due to an emergency arrival and put in a room without a bed. Jack, wanting to sleep, had to use the floor. He stayed overnight, but according to Mrs Williment, it took him 13 hours after arrival to be given a bed on a ward.

The article also included a statement from the Dr Yvette Oade, the Chief Medical Officer of the hospital’s NHS trust, apologising for what happened and confirming key aspects of the story.

That statement says, in part: “Within four hours a decision was made to admit Jack to our Children’s Assessment and Treatment (CAT) Unit for further monitoring overnight. Unfortunately, the unit was also experiencing exceptionally high levels of demand which meant that Jack was required to wait in the clinical treatment room in the Paediatric Emergency Department until a bed became available. Jack was admitted to the CAT Unit later that evening and was discharged home the following morning after a medical review.

“We are extremely sorry that there were only chairs available in the treatment room, and no bed. This falls below our usual high standards, and for this, we would like to sincerely apologise to Jack and his family.”

Following the story receiving national coverage, a number of people on social media claimed to have information that countered the mother’s story. 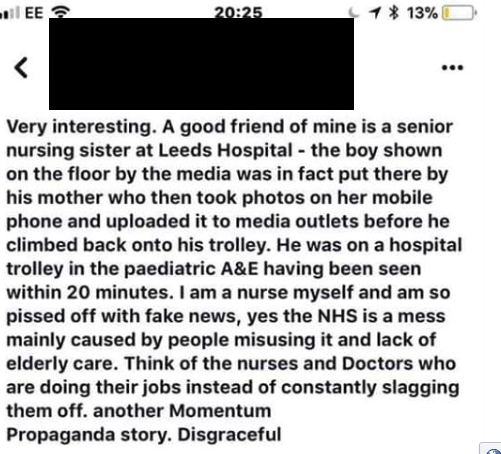 A post on one woman’s Facebook page claimed that she knew a nurse at the hospital, who supposedly said that the boy actually had a trolley and was placed on the floor by his mother for the purpose of the photo (a claim that seems to be contradicted by the statement from Dr Oade). This account of the incident was copied and pasted by numerous other people and quickly spread across social media, making it look as though many people were claiming to know the situation.

The woman has since told the Guardian that her account was hacked and that she knows nothing about the situation. 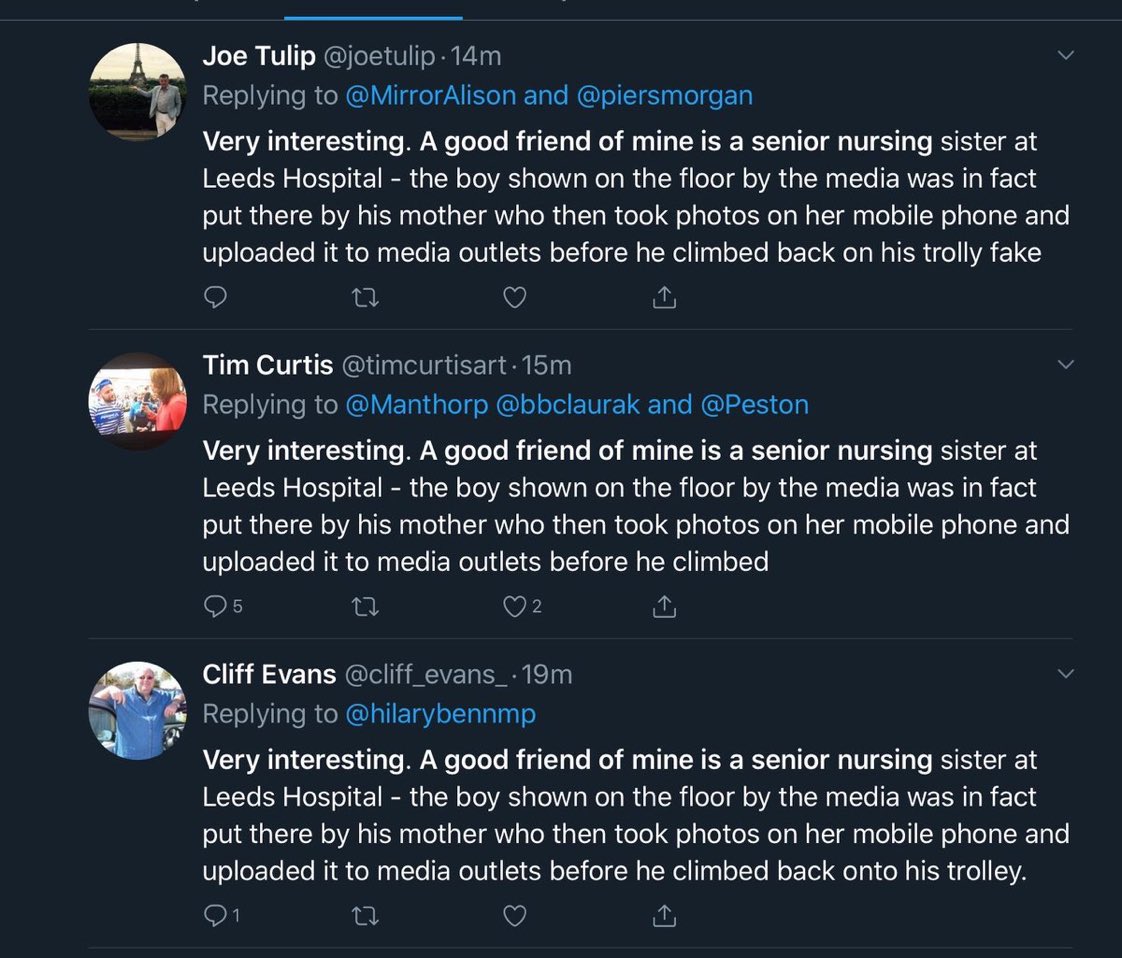 More generally, numerous people began to claim that they had a medical background or knowledge, or had spoken to someone in the medical profession who disagreed with the boy’s treatment, thus proving the image was fake. Again, there is no clear proof any of these accounts are true, and many appeared to be copy and pasting identical statements. They are also contradicted, again, by the statement from Dr Oade given to the Yorkshire Evening Post.

Many social media users have suggested that these accounts are 'bots', but we have seen no evidence to date that they are automated. As we've written before, what can appear to be bot-like behaviour is often carried out by real humans.

There has been some confusion as to whether a hospital trolley bed can be seen in the photo (which shows an item of furniture with wheels in the upper right corner). There's no reason to believe that this is a trolley bed; a lot of hospital equipment has wheels so it can be moved to where it is most needed. The equipment in the photo also appears to have shelves, suggesting it is unlikely to be a trolley bed. 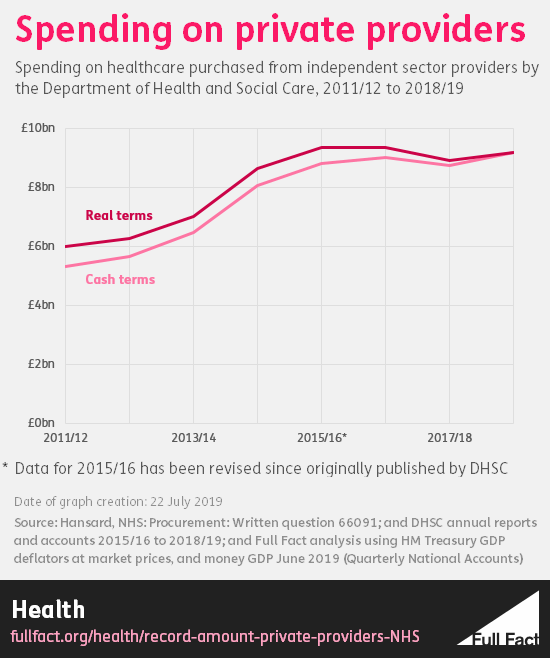 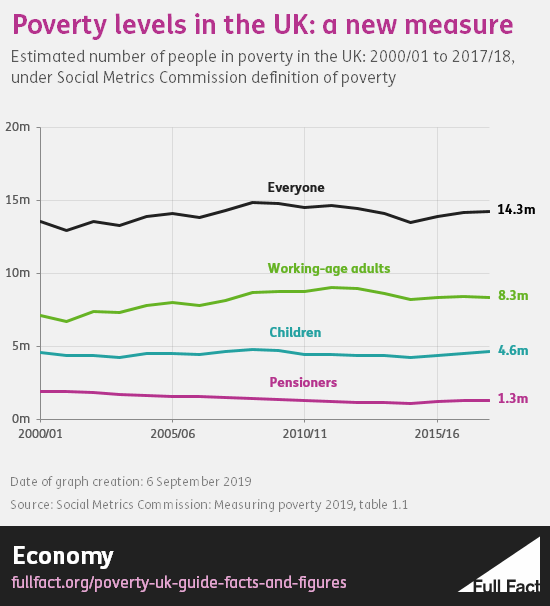 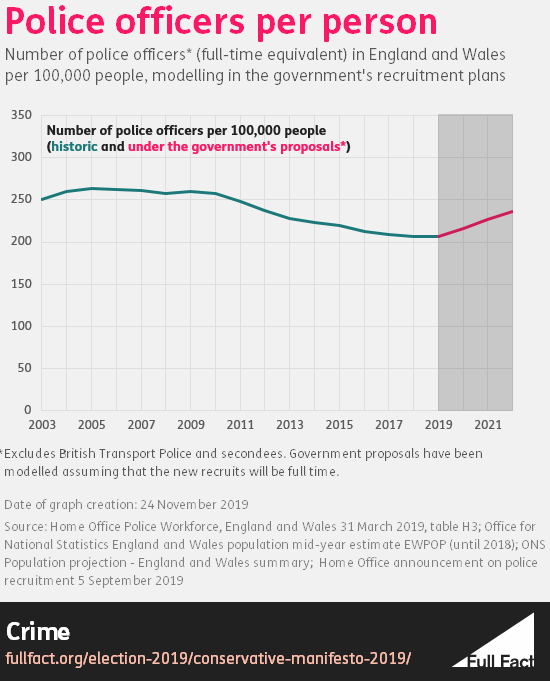