"Far from the predictions of the doom merchants, today's figures show work has started on over 15,000 new affordable homes since last September - a massive increase on the previous six month period. This is clear evidence that our efforts to get Britain building are starting to yield impressive results."

"These figures reveal the true extent of the tragic failure of the Tory-led Government's housing and economic policies. The £4 billion cut to the affordable housing budget not only led to a disastrous 68 per cent collapse in affordable house building over the past year but hit the construction and house building industries hard."

According to the Government these showed a "rapid and dramatic" increase in the numbers of new affordable homes being built.

However that couldn't have been more different from Mark Easton's own analysis which spoke of a deepening housing crisis, claiming the figures showed a 68 per cent fall on the previous year.

As Full Fact discovered when analysing a similar clash between Boris Johnson and Ken Livingstone, the recent confusion over affordable housing statistics is caused by the fact that 2011 was actually a period of transition between two different affordable housing programmes.

The previous Labour Government set up the 'National Affordable Housing Programme' (NAHP) while in office - however this was brought to a close in March 2011 by the Coalition Government. The current administration has replaced this with the 'Affordable Homes Programme' (AHP), which began in the second half of 2011.

What this means for affordable housing statistics is that, for the first six months of the 2011-12 financial year (from March to September), an unusually small number of affordable homes were started.

Statistics on affordable housing are available from the Homes and Communities Agency which has just published the latest figures up to the end of the 2011-12 financial year (to March this year).

They confirm that 15,269 affordable homes were built in the second half of 2011. Grant Shapps hails this as a massive increase on the previous six month period.

However, while this may be a 'massive' increase compared to the previous six months, this comparison is hugely inappropriate since, as Mark Easton points out, the half-yearly figures are not seasonally-adjusted. This is illustrated below: 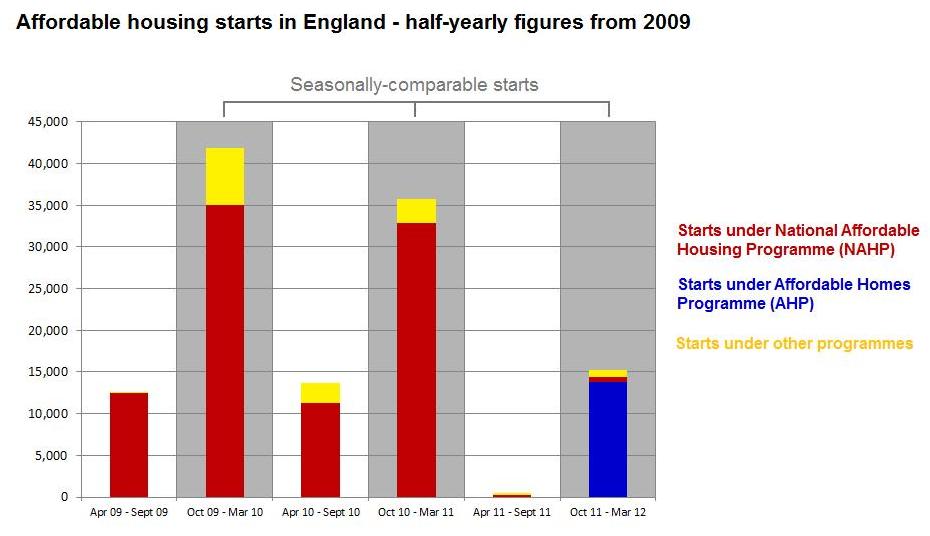 The April to September 2011 period shows this 'unusual' period of transition between the NAHP and AHP housing programmes. However, even looking at 2009 and 2010 demonstrates that the first half of every financial year sees substantially fewer starts than the following six months.

In fact, even without the 'unusual' transition period, we could easily expect large increases in the second half of every financial year.

Compared to the norm of the previous two years, 15,000 affordable housing starts is at best unimpressive - although how much of this is down to the relative infancy of the Government's new programme remains to be seen. For this reason, we can't yet cast judgement over the success or otherwise of the AHP.

On the Today programme this morning Grant Shapps also pointed to the large number of housing completions as evidence of the Government's improving record.

"Mark [Easton] only discussed half the figures there - the other side is housing completions which were nearly 60,000 within these stats here in that period."

Looking to the statistics, there were just over 50,000 affordable housing completions in 2011-12, and adding in completions on the open market indeed gives nearly 60,000 completions overall for the same period.

The figures for affordable housing completions are also available from the same dataset, and do indeed show more completions in 2011-12 than the previous year: 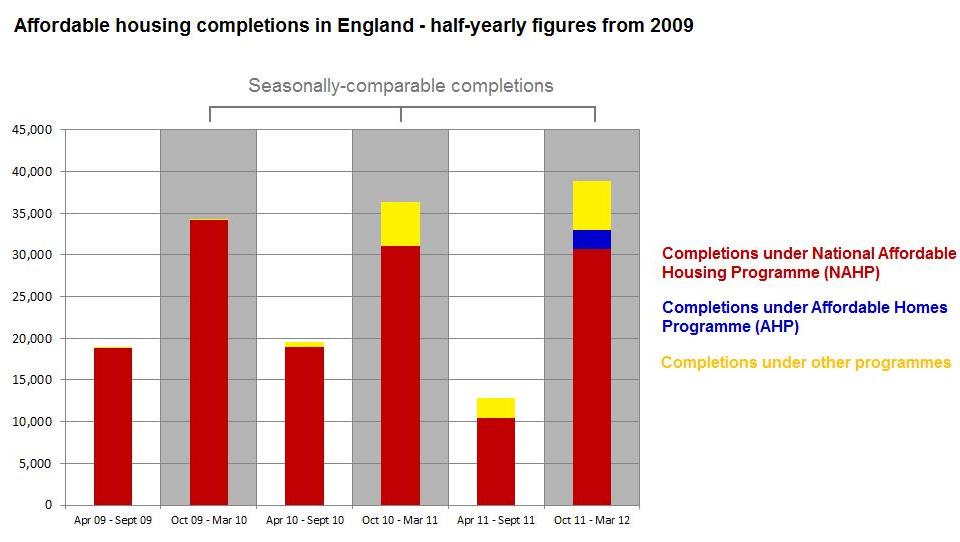 However Mark Easton pointed out in response that most of the housing completions in 2011-12 were still under Labour's NAHP, as the graph above demonstrates.

Given that housing can take years to build from start to completion, it is understandable that the NAHP still registers completions in the statistics.

Full Fact has previously found that figures on affordable housing completions are not useful for assessing the performance of the Coalition Government for exactly this reason - and until we have more information on projects delivered through the AHP we again won't be able to gauge its impact.

The Department for Communities and Local Government maintain they are on track to deliver 170,000 affordable homes over the next few years, and their performance on meeting this target is yet to be established.

However, the Housing Minister's use of statistics on affordable housing starts as 'evidence of impressive results' paints a misleading picture. The only useful means of establishing trends in starts is to use annual figures covering the same season - in this case comparing the last six months of the 2011-12 year with the same period from 2010-11.

Comparing starts this way shows that 15,000 affordable housing starts represents considerably fewer starts than is normal for this period in a year. Some of this could still be due to the transition period in 2011, so it remains to be seen whether the AHP will increase its starts in the coming years.